Exhibitions and Displays
The celebration will include an exhibition and two large screen displays celebrating the work of artists associated with St Michael's. The exhibition will be of the paintings of Alan Thompson, a long serving member of St. Michael's choir who died in 2021 from Sunday September 26th to Sunday October 3rd.  The large screen displays will show the work of the Rev. John Louis Petit - a former curate of the Parish, landscape painter and noted architectural critic, and of various 19th century artists who sketched or painted the outside and the inside of St. Michael's church before and after the restoration of the 1840s. These will be shown before and after other events in church during the week of the celebration.

Also on September 26th at around 11.30am, the Bishop of Lichfield ​will bless the Display Board in the churchyard next to the grave of  John Louis Petit and his siblings.

Alan Thompson - a commentary on his work by Dr. Joanne Allen

Alan was a precocious natural artist from a very early age. He would often show me drawings he did when he was about eleven and marvel at his own proficiency with linear perspective, which he seemed to have understood even without having been taught. In fact, he seemed quite preoccupied with his childhood in the Welsh town of Barry during the Second World War, and later in Birmingham. He explored memories of his childhood homes in his painting depicting his mother washing up by the kitchen window in subtle tones of blue and the scenes of trams in Birmingham with their intense use of primary colors.
Color played an outsized role in Alan’s painting style. Indeed, his two favorite characters he included in a series of Surrealist paintings were named after colors: Mr Pink and Mr Green. In several panels, we see the whimsical twosome ice skating and laughing in bizarre landscapes which seem to be illuminated by several suns. Alan’s use of color was confident and compelling. Look at how well he selected the range of hues for each painting. These are not ordinary colors straight out of the tube; we see periwinkle blue, terracotta, pale aquamarine, celadon green, warm grey, and salmon pink – each color paintstakingly mixed and brilliantly complementing its surrounding hues. Alan would craft the wooden panels himself, and he once told me that his precise concoction of oil paint, thinner, and other substances was a closely guarded trade secret.
In addition to the twentieth-century influences on his work, he was passionate about the study of medieval art. Take his ‘Nativity Triptych’ for example. Within a traditional gabled triptych format, he situated the Madonna (wearing Wellington boots!) and Christchild in a modern-day setting complete with bathtub, and the three magi wearing everyday suits, shirts, and ties, just as artists in the fourteenth and fifteenth centuries would include their patrons wearing contemporary dress. Supplementing his angelic winged figures holding musical scrolls (St Michael’s choristers?) are sweet little creatures that almost remind one of medieval marginalia- these are in fact Alan’s own stuffed toy collection that he kept in a row on his mantelpiece.
Home was of great importance to Alan and his art. My favorite paintings are those which look out from the windows of his small and traditional semi-detached house onto Ivanhoe Road and beyond to the surrounding neighbourhood, railway bridge, and even up to St Michael’s and the Cathedral. While I was away travelling in Europe and America, it always impressed me to think that he could find so much interest and beauty just looking out of his window. A series of etchings he did in the 1950s while at college (not on show) depict views from his Birmingham home, indicating that this was a lifelong interest.
Those of you who did not know Alan well might be surprised at the intense joy communicated by these colorful and dynamic images. A great lover of art, architecture, history, and music, he was always excited by learning and creating. Alan was a captivating and unique character and an inspiration to those of us who had the privilege of being his friend
​
Joanne Allen, September 2021 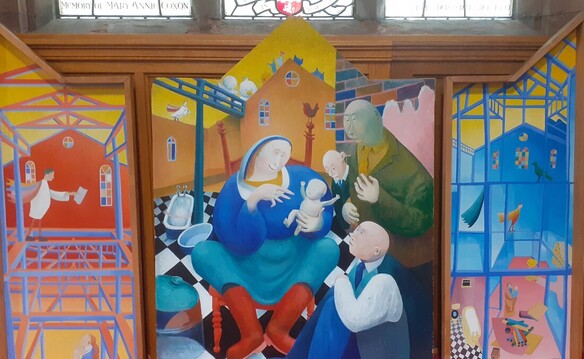