At the time of the Romans, Wall, or Letocetum as it was then called, was a settlement of considerable size which had grown around the Roman fort at the junction of Watling Street and Ryknild Street. There were Christians, probably with a church, in this Romano-British settlement. In the early or mid 7th century Bishops and monks suffered as a result of a Welsh victory at Caer Lwytgoed which could have been Wall itself or a place nearby. This makes it likely that there was a monastery in the neighbourhood at that time. In the mid 13th century there is a record of a graveyard at Aldershawe which was presumably used by the inhabitants as a field cemetery although the general burial place was at St. Michael’s, Lichfield, which became the parish church for the area, a link which is still present today within the United Benefice of St. Michael and St. Mary, Lichfield and St. John, Wall. In 1840 John Mott of Wall House gave a grant of land and an endowment of £700 for the church and graveyard. This was augmented by a sum of £500 left by Robert Hill who was a previous owner of Wall House, and further funds were raised by public subscription. St. John, Wall, was built as a District Chapel in the Parish of St Michael’s Lichfield. The finished Chapel of Wall was consecrated by the Bishop of Hereford on behalf of the Bishop of Lichfield in May 1843.
​
Much ​work has been done in recent years to preserve the building and the church community for the  future. In 1982 a major restoration was undertaken. The whole of the outside stonework, which had become black with smoke carried on the prevailing wind from the Black Country for over one hundred years, was cleaned and then repointed. Inside, after installing a damp course, much plastering and redecoration was carried out. The roof was lined and timber preserved. More recently the organ, bells and heating system have been overhauled. The front and back of the nave have been ‘Re-ordered’ to provide more space and the whole church re-carpeted.
The present pipe organ was installed in 1883 at a cost of £150. It was made by Brindley & Foster of Sheffield and was originally operated by hand using bellows thin the vestry. The pulpit and choir stalls were carved and fitted by the Revd. Adams, Vicar in the 1920s.  The wrought iron Victorian lectern is also of note. The war memorial records the names of those from the village who were killed in the two world wars. 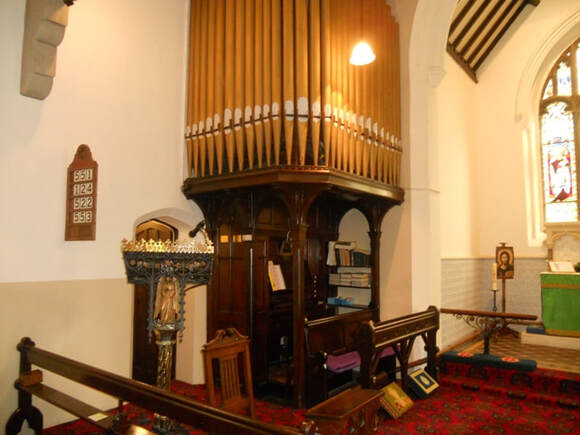 Lectern, organ and choir stall
An ​extension on the north side which houses a toilet, small extra meeting and storage areas and a kitchenette was opened by the Bishop of Lichfield in 2014. This exciting development means that the church community of Wall can continue to be a vibrant and relevant Christian presence within the village.
Pictures of the stained glass windows are shown below. They follow a clockwise order around church, beginning in the north west corner with the large central "Jesus the Good Shepherd" window above the altar. The last picture shows two windows representing the Holy Spirit and the Lamb of God, that are in the porch. Apart from that window, the Good Shepherd window,  and  the window in the southwestern corner that shows Jesus appearing to Mary Magdalene after  the resurrection, they form a coherent set showing the Old Testament prophets and writers of books in the New Testament.  The Resurrection window is by from the firm founded by the famous designer and maker C. E. Kempe. and is dedicated to the memory of Georgina Charlotte Harrison and is dated 1909. It probably replaced one containing representations of St. Matthew and St. Mark who are otherwise missing.

We now move outside the church to the churchyard, with its stunning views overlooking the Roman ruins. It contains a number of Commonwealth War Graves of those from the village who died during the world wars.  The churchyard was originally quite small  and was extended in 1910 (by Church Cottages losing much of their gardens!) and in 1926 an area between​ the churchyard and the Roman site was given by Miss Ethel Harrison for use as a churchyard. This was consecrated by the Bishop of Wolverhampton and brought into use in 1987.
The Commonwealth War Graves