A VIRTUAL TOUR OF ST. MICHAEL'S CHURCH
​The first station - the font

The tour begins at the back of the church, at the end of the centre aisle and in front of the font. As we look first to the front of church, the areas containing the central rows of pews is the nave and the pews to either side are in the North (left) and South (right) aisles . Beyond the pews we see the nave altar from which most services of Holy Communion are celebrated. At these services we remember the meal Jesus had with his disciples on the night before he died.
The coloured frontings, hangings on the altar, reflect the seasons of the church’s year - green for most of the time, but purple for Advent and Lent, the seasons of preparation, and white for Christmas and Easter, as the church celebrates the birth and resurrection of Jesus. On a few days of the year the hanging will be red - during Holy Week when the events of the arrest, trial and execution of Jesus are remembered, and at Pentecost when the coming of the Holy Spirit is celebrated. The banners at the front of church are also changed on a seasonal basis. Illustrations of the hangings  and banners are given on a separate page. 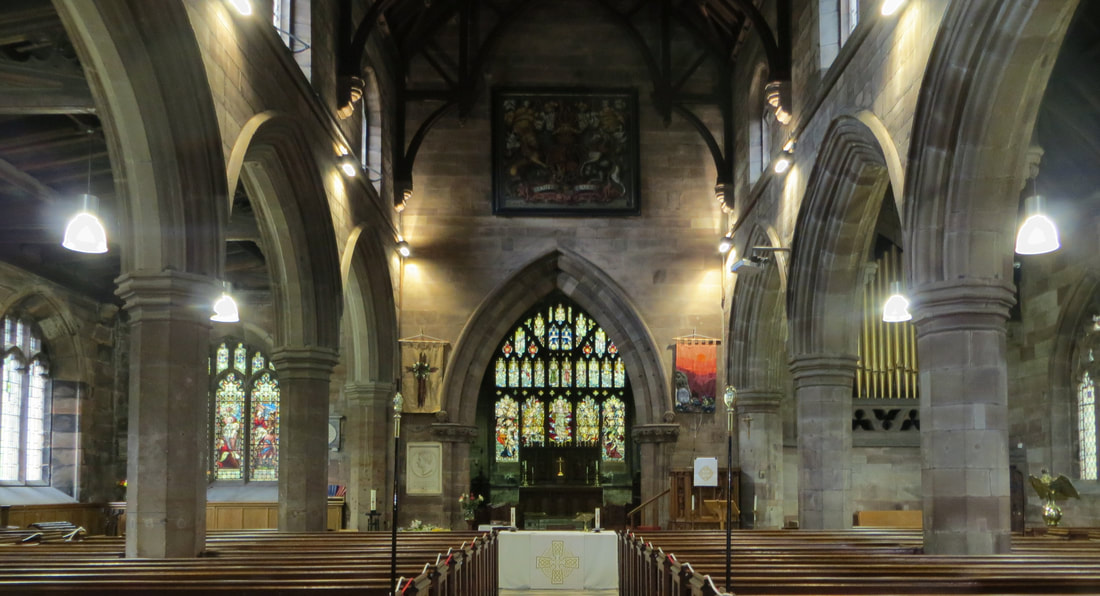 The nave and aisles
Beyond the nave altar we see the chancel with its choir stalls and the large East window, with the high altar at the very front of church in front of a wooden carved reredos. We will look at this area in more detail at Stations 3 and 4. Looking in this direction, perhaps the most prominent feature of the view is the huge coat of arms hanging above the chancel arch These are the arms of Queen Anne and were given by a churchwarden and a member of the congregation in 1711, perhaps in a desire to obtain favourable consideration for funds by Queen Anne’s Bounty, a fund that was used to augment clergy stipends in poorer parishes.
Turning around towards the back of church, we see and can walk around the font with its rather worn stonework, which dates from the seventeenth century. Many generations of Lichfield residents have been baptized here - formally the initiation rite into the church, but also an important community rite of passage. Beyond the font is the base of the tower, where there is now a small kitchen and toilet facilities, with the belfry sitting on the next level, accessible via an external door. In the early nineteenth century, this part of the church would have looked very different, with a gallery for the singers above. The belfry contains a peal of six bells dating from 1722 that are still in use. It contains a number of plaques recording  peals of bells for specific  occasions. Two of these are shown below - one to mark the retirement of Percival Howard after his 33 year tenure as vicar in 1946, and one marking Queen Elizabeth II's Silver Jubilee in 1977.
On the back wall there are, amongst others, monuments to John Newton (d 1724) one of whose sons went on to be Dean of St Paul’s, whilst the other founded Newton’s College in the Cathedral Close, for widows and unmarried daughters of clergy. This is not shown here as it is quite worn and difficult to see in a photograph. Below we can see the memorials to Richard and Felicia Hammond and their daughter Mary Cobb, all friends of Dr Johnson, and Joseph Rochford, a former curate of St. Mary's in the city centre.
o the left, on the south wall, there is a stained glass window that is rather enigmatic but seems to eulogise motherhood and femininity. Certainly, the Old Testament character of Ruth can be seen in the middle panel, with the corn she has gleaned from the fields. The female figures in the two outer panels are not so easily identified.  The subject of this window may partly be explained by noting that it is in memory of Mary Coxon, who is described (in the bottom right hand corner) as a "devoted mother".
On the west wall to the right, somewhat obscured by the inner porch, there is the “baptism” window, which depicts little children being brought to Jesus. Originally, the font was positioned much closer to it than it is now - at the traditional placing near the church door.
We turn and walk now to the second station just a few yards down the centre aisle to halfway along the pews.
​
Station 2 - Nave