A VIRTUAL TOUR OF ST. MICHAEL'S CHURCH
The fourth station - the high altar

​At the front of the church we come to the high altar. Until recent decades when the more mobile altar in the crossing has been used, holy communion would have been celebrated from here - and indeed it still is for early Sunday morning prayer book services. The front of the altar is, unsurprisingly, decorated with numerous angels with musical instruments and censors for incense. ​ Behind the altar we see the reredos, with its carved figures of the four archangels. From left to right we have  Raphael (with a staff and a fish), Gabriel (with a lily), Michael (with a shield and standing on the devil) and Uriel (with the solar disk).
Above the reredos is the large east window, depicting the Ascension of Jesus. The central figure of Jesus ascending to heaven is surrounded on all sides by angels. At the bottom of the lights immediately to the left and right of Jesus, partly obscured by the reredos, we again have the four archangels - Gabriel and Raphael on the left, and Uriel and Michael on the right, with the same attributes as on the reredos. Above them we have the serried ranks of angels. 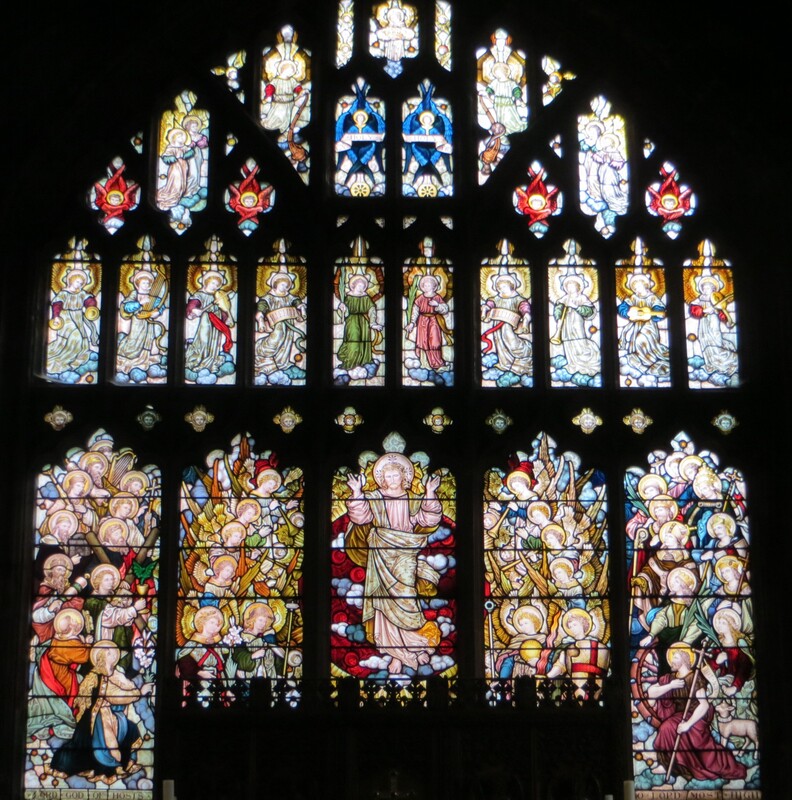 The East Window
Beyond the angels on the left  we have representations of the Old Testament prophets and New Testament Apostles. On the outer column from the bottom these are St. Peter (with the keys of heaven), Ezekiel (with a scroll), Nehemiah (holding a depiction of Jerusalem that he rebuilt after the exile), Daniel (with a staff), Isaiah (with another scroll) and David (with a harp). On the inner column from the bottom these are the Virgin Mary (with a lily), St. John (with a chalice), St. Andrew (with his cross), St. Thomas and St. Philip. Beyond the angels on the right  we have representations of the saints, martyrs and church figures. On the outer column from the bottom these are St. Agnes (with a palm branch, signifying she was a martyr), St. Alban, St. George (with his flag on his shield), a bishop, a nun and a monk. On the inner column from the bottom these are the John the Baptist (with his staff), St. Catharine (with her wheel and a palm branch), St. Thomas a Becket (with a sword through his head!), St. Oswald (crowned) and St. Stephen (again with the martyr's palm branch).
Clustered around the altar are a number of memorial plates to clergy who have served the parish in the past - James Sergeantson (Rector 1869 to 1886), Otho Steele  (Rector 1893 to 1913)  and Percival Howard (Rector 1913-1947) . The latter also served as an army chaplain in France during the First World War.​
On the left of the altar there is a memorial tablet to those of St Michael’s parish who died in the First World War, together with an altar dedication. On the right there is a small brass plaque erected in 1728 commemorating Michael Lowe of Tymore, founder of the Lowe’s Charity “to provide yearly 12 caps and coats for the benefit of 12 poor men, inhabitants within the City of Lichfield”
At this point,  we turn and look back down the church from the altar - the view seen by clergy and laity alike during the giving and receiving of communion. There is now the option of returning to the church door and to follow one of the other virtual tours of the outside of the church and the churchyard 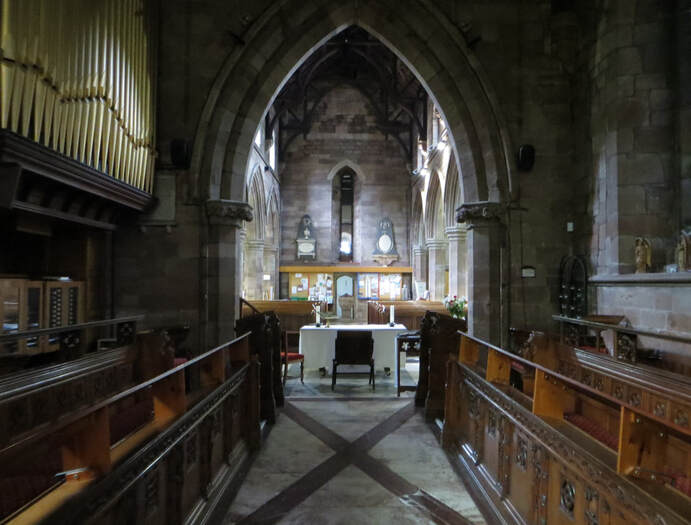